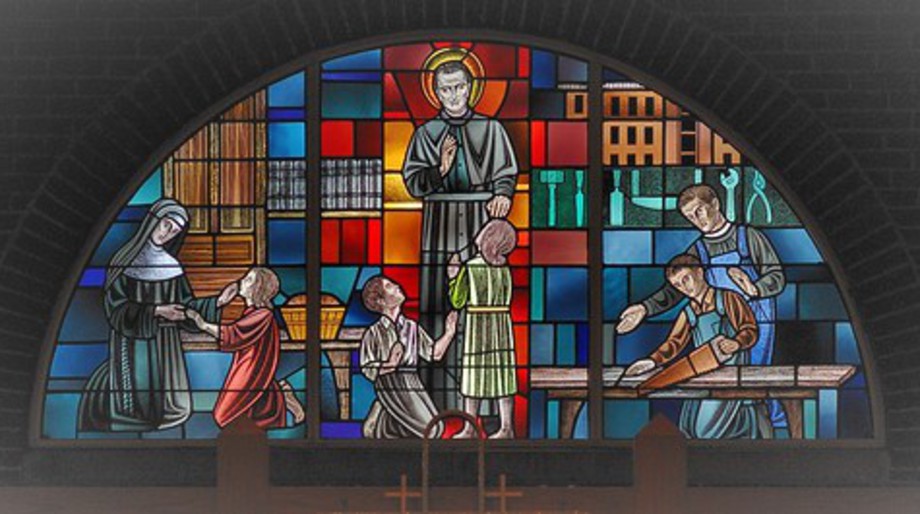 In 1972, Cardinal John Carberry announced that a new parish would be established in Maryland Heights, Missouri. Because of the growing population in the area, this new parish would serve the growing area which was part of St. Blaise, St. Richard, St. Monica, and Incarnate Word parishes.

Father Donald J. Hoffman, who had been a teacher for many years at the St. Louis Prep Seminary High School, was asked to be the first pastor. He chose the name of St. John Bosco, the patron saint of youth, to be the name of this new parish.

One Hundred and Eighty families registered on the first week-end of September in 1972. During that first year, Sunday Masses were celebrated at McKelvey School, and Father Hoffman lived in a home in the Seven Pines subdivision. The church business office was also at this first residence.

On June 10, 1973, ground was broken for the new Church at 12934 Marine Avenue. Ray Maritz was asked to be the architect of the elegantly simple Church that would serve as the center of this new congregation. The Church and the Hall below the Church would be the center of prayer, education, and social events for the five-hundred families that were now members of this growing faith community.

On September 8, 1973, Bishop George Gottwald, the auxiliary Bishop of St. Louis, laid the cornerstone for the new Church and on July 21, 1974, the First Mass was celebrated by Fr. Hoffman and the Church was filled with the new members of the parish.

In 1978, Sister Christine Massman, CSJ, was hired as the first coordinator for the Parish School of Religion (PSR) which now numbered over three hundred students.

The parishioners, during these first years, took on the great responsibility of raising the funds to pay for the Church. There were many fund raising projects. In those early days, the Parish Carnival was the major event. The work and the dedication that went into these projects not only raised the necessary funds, but also established the Bosco Tradition that has been so important to this community. Many life long friendships were formed as parishioners worked together to establish the parish as a vibrant community.

The Men’s Club and the Ladies Guild became the backbone of the work that was done. Other groups that were formed included the Athletic Association, the Salesians (young adults), Quilters, and the Pro-life committee.

In 1987, Father Hoffman’s tenure at the parish was completed and he became the chaplain at the Ursuline convent in Kirkwood. Fr. Ken Zimmerman replaced Fr. Hoffman as the Pastor. Plans were already in place to expand the campus of the parish with the addition of a Parish Center which would provide classrooms, meeting rooms, and a multi-purpose room.

When Fr. Patrick O’Laughlin became the Pastor in 1988, he began to organize the effort to make these dreams a reality. With the help of the newly organized Parish Council, additional land was purchased which would allow the Parish Center to be built and a Rectory which included the business office. The athletic field ground was purchased and was laid out and cared for by the members of the Athletic Association. The St. Vincent de Paul Society was begun in order to provide help to those in need in the immediate area of the parish. The Senior Group was also organized at this time.

When Msgr. Roland Gannon took up residence as a Senior Priest, two Sisters of the Community of the Eucharistic Missionaries from Mexico City began to take care of the rectory residence. In December of 1989, Archbishop John May dedicated the Parish Center and the new Rectory. The gym was dedicated in 2007 in honor of Father Don Hoffman and is now called Father Hoffman Hall.